The Highs and the Lows of Pendleton County

Carolyn Reid finds out where is the highest and lowest point of Pendleton County. 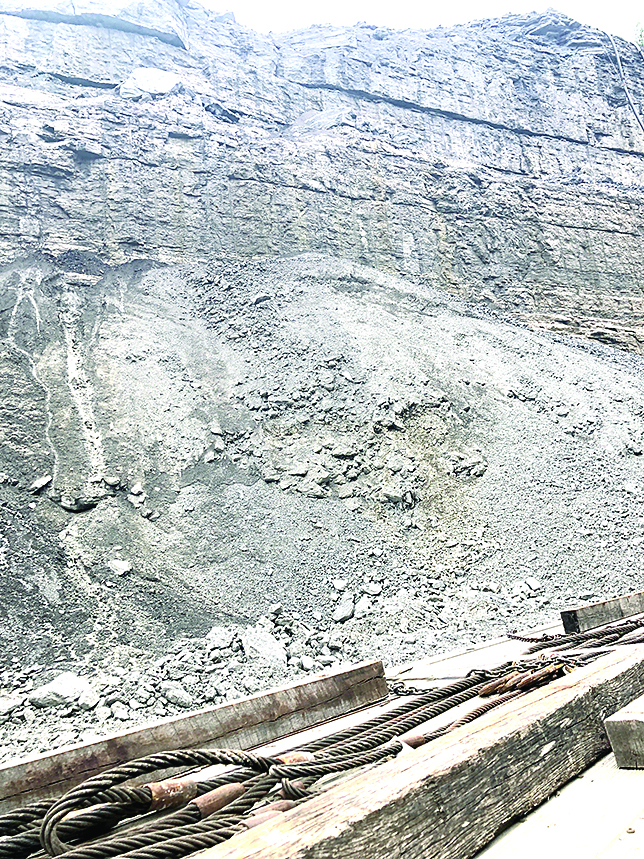 ned in 1972, we students were alarmed by intermittent shaking and rumbling that we felt throughout the day. We grew accustomed to the disturbances once adults explained to us that blasting at the mine across HWY 27 was the cause of the the ground moving a little beneath our feet.
Students at Northern still experience those events nearly 50 years later. Fifty--actually over 65--years of blasting at a mine can bring out many loads of limestone, gravel, and sand. That removal also leaves a big hole. The “big hole” at Butler’s Hilltop Mine, as a result, has become the lowest point in Pendleton County. Located to the north, east, and west of Butler Cemetery and at some feet 150’ above sea level, it isn’t in any danger of becoming a Galveston, TX, but it is still deep enough that when a worker from a crane company was recently at its bottom, he knew that he was “a long way down.” The picture he shared does not really do the depth justice. The work that began in 1954 has taken the depth to some 360’ from the top, according to Plant Manager Terry Figgins. Today, Figgins states that some 5,000 to 7,000 pounds per day leave the mine to provide construction materials for public constructions such as airports, dams, parks, schools, and private construction, as well.
The question of the lowest point is garbled when we consider that the Hilltop site is that it is a man-made site. Brett Price, Planning and Zoning Administrator, provided insights as to the natural low elevations across the county.
The confluence of the  Licking and Grassy Creek at Demossville comes in as the lowest natural spot at 480 feet. Thaxton’s in Butler is 10 feet higher at 490 feet, and the confluence of Kincaid Creek and the Licking River at 504 feet.
Conversely, the highest spot in the county is found on Hogg Ridge Road, close to Mt. Carmel Church. This spot is 962 feet above sea level, and its most prominent feature is a water tower nearby. Fran Carr, Pendleton County Library’s Historical and Genealogical overseer, shared that this area was settled by the Adams family who migrated from Boone County around the mid-1800s. This family organized the Baptist Church of Doudton (or Doughton), and the church became Mt. Carmel Baptist which still flourishes today. The cemetery across the road from the church holds several Adams family members, including Thomas Adams who donated the land for it.
Other high elevations in the county do not vary as much as do the low elevations. Bethel Hill Cemetery comes in at 940 feet and the Bethel Church ground is 932 feet. Many  sites around the county stand around 920 feet: several areas between Sharp and Trankler Road, at Morford Road and HWY 10, and at Broadford Road and Morgan-Hightower Road.
Visitors to the area regularly remark that the area is gorgeous. The rolling hills brought some of our ancestors to settle here, and it brings people to visit today, even if it is just to drive through or to camp a couple of days in the varied landscape that is Pendleton County.
Our rich natural beauty and heritage make those of us who live here a blessed people.