Before the Wildcats had Dontaie, they had the explosive TNT 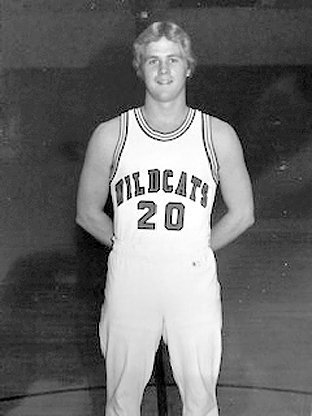 The “N” does not stand for anything, but when you pair it with Talbert and Turner it becomes TNT, a nickname that summed up nicely the explosive scoring of Talbert N. Turner, Jr.
“I’m just a firecracker. My dad was the first TNT, the dynamite,” said Turner. Turner has long been the all-time leading scorer for the Pendleton County Wildcats with 3,183 points. With Dontaie Allen poised to set a new record later in the week, many throughout the county are fondly remembering the days of the Wildcat explosive scorer from the early 1980’s.
That dad Talbert, Jr., referenced is Talbert Turner, Sr., the well-known retired Pendleton County biology teacher who was also the most successful high school baseball coach in the county’s history. His mom, Mary, is also a retired Pendleton County school librarian. As is usually the case, parents were instrumental in Turner’s development as a player.
“They would haul me to wherever there was an opportunity to play, whether it was Jr. Pro in Taylor Mill and Newport or tournaments throughout Kentucky,” said the son who inherited their strong work ethic.
That work ethic was turned into talent on a concrete pad that dad made outside their home in Peach Grove, or “the Grove.” It was on that pad that Turner and his friends would play basketball from “daylight to dark,” living out that stereotypical Kentucky basketball dream.
“We would shovel snow off the pad to be able to play. I remember in the summer we would line our cars up around the court to have light to play,” he added. “We would play until mom would come out and make us come in.”
Whether it was the Horns, Roseberrys, Danny Marsh or guys coming from throughout the county, the play on that concrete pad led to entries in the Wildcat and KHSAA recordbooks.
One friend stood out, though--Mark Mains who lived right across the street.
“I’m very appreciative of Mark. He was three years older and pushed me to play every single day of my life. And we did,” gushed Turner.
The play of both Turner and Allen is similar. There are legendary tales of work ethic from both as they honed their skills on the hard court. They both have a great support system that encouraged and invested time in their talent, allowing them to excel. They both are very good outside shooters with Turner playing before the advent of the three-point line. Both began their varsity careers in the 8th grade when they were moved up by the varsity coach--Woody Crum for Turner and Ed Cravens for Allen. Both are strong slashers who could get to the basket, take the bump, and finish the play while going to the line for easier points.
In fact, it was on the free throw line that Turner scored the first six points of his collegiate career at Morehead State University. Playing in Norman, Oklahoma against the #1 ranked Sooners and their All-American Wayman Tisdale, Turner hit six free throws.
It was a style of play that Turner credited to those high school friends, most of whom were older than he was.
One of the voices of the Wildcats is PCRO’s Troy Steele. He has a unique perspective of attending Pendleton County High School as Turner was pouring in points and calling the games while Allen is matching them.
“Talbert was smart and mature beyond his years, even when he played as an 8th grader. He had a lightning quick first step and was very strong with the ball. He could take the hard foul and still score the ball,” said Steele.
Like Allen, if you tried to take away the drive, Steele pointed out, “He would bury you with jumper.”
Many of those creative moves and finishes were a result of the imagination of his father, Talbert, Sr.
“Dad would stay at the court and think up a move, whether it was a layup after a double pump or taking a bump from the defender and then making the basket. Mark, the other guys, and I would stay on the court and do it over and over until we could do the move,” he said.
Mains laughingly agreed, “We would do it over and over and over and over. TJ had big hands and could do whatever he wanted with the ball. He was so strong.”
It was Turner’s 7th grade year that Mains knew he was going to be good, but Turner’s freshmen year was a turning point.
“He could never beat me. Never. Then his freshmen season, he beat me and I thought, ‘He’s never beaten me before.’ said Mains who traveled Europe with the Army basketball team.