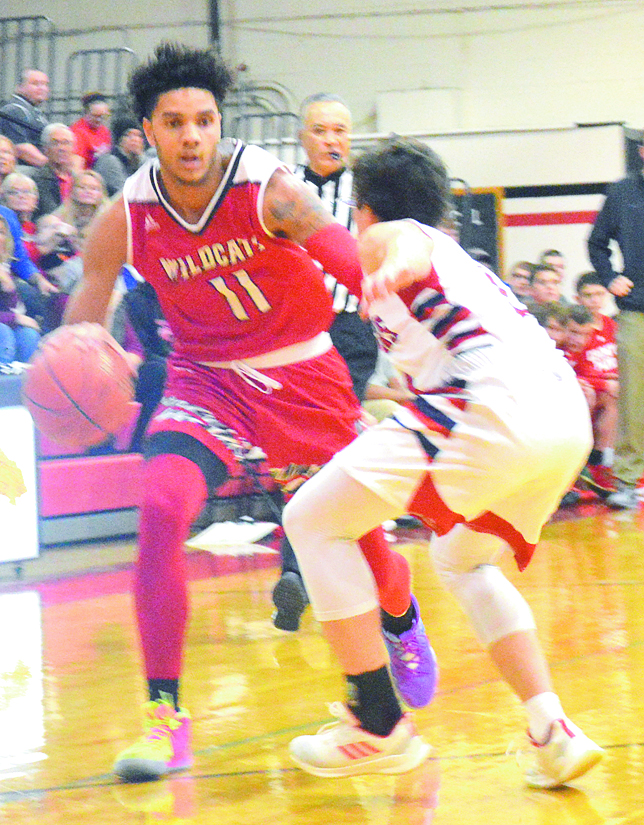 The stage was set for a historic evening to unfold at the inaugural Phillip Wood Classic. The star of the show, Dontaie Allen, headlined the event on a night where 60 years of Wildcat basketball was celebrated and a torch was passed from one legendary hooper to another.
It was a night where the past met the present, as headliners from yesteryear such as Wildcats all-time winningest coach Phillip Wood and scoring machine from the 1980’s, Talbert Turner, Jr. were on hand as Allen looked to topple a record that once seemed unbreakable. It’s a figure that has stood the test of time and in the KHSAA record books for over three decades: 3,183.
In a hard-fought contested matchup versus St. Henry that saw him pick up his fourth foul midway through the third quarter,  Allen entered the game with 30 points to begin the final period still 18 points shy of history. Maybe the record would have to fall on another night? Allen promptly went to work and did what he has done better than anyone who has ever worn the red and black colors of Pendleton County: get buckets.
Seven field goals, including one from behind three-point range, coupled with seven free throws, the final two with 1:17 remaining that officially placed his name ahead of Turner’s as the new all-time leading scorer in program history; and just like that, a record that once out of reach had suddenly been conquered.
“Anytime you can pass someone like Talbert Jr., and do it in the fashion where we were able to get a win means the world to me,” Allen said following his historic effort.
Turner, who was seeing Allen play for the first time in his career, marveled at the ease in which new scoring king was able to collect his points.
“I had heard about Dontaie a few years ago back when he was an eighth grader and how talented he was. What he’s been able to accomplish is simply amazing, and I know he’s worked very hard to get it. Records are made to be broken, and I congratulate him on doing this and moving forward,” Turner said.
Perhaps  the  only person  who  has  worked  nearly as hard as Allen in collecting the nearly 3,200 points has been Wildcats longtime statistician, Pat Cooper. She’s had the unenviable task of trying to track each point the 6’7” wing player has produced during his career and says it’s definitely been a challenge.
“It’s a lot harder than it looks and with Dontaie there’s no telling how many pencils I’ve went through over the past few years,” she said with a laugh. Affectionately known by the players through the years simply as  “Mama”, she’s also known as the go-to source for anyone in the gym with a sweet tooth as she routinely furnishes a large zip lock bag full of candy on display at the scorer’s table at each game. She noted that it’s become customary for Allen  to dig  out a  tootsie roll for good luck prior to the start of each game.
Someone who would be quick to say luck isn’t necessary would be fifth-season Wildcats head basketball coach, Keaton Belcher. He has witnessed first hand the behind-the-scenes grind that Allen has put forth all throughout his teen years that has resulted in him standing alone atop the Pendleton County record books.
“He makes it all look easy, but the work he’s put in has been anything but that. I’m proud of Dontaie for handling everything he does the right way, and he deserves everything good that is happening for him,” Belcher said.
Allen’s ascent up the all-time ranks comes with a near limitless ceiling. The Wildcats still have over two-thirds of their schedule remaining with the possibility of becoming just the second player in the state to reach 4,000 not out of the question. When asked what Turner said to him following their unofficial “passing of the torch” moment, Allen commented that it was something he figured he would hear from the long-time scoring record holder.
“Just keep getting buckets.”