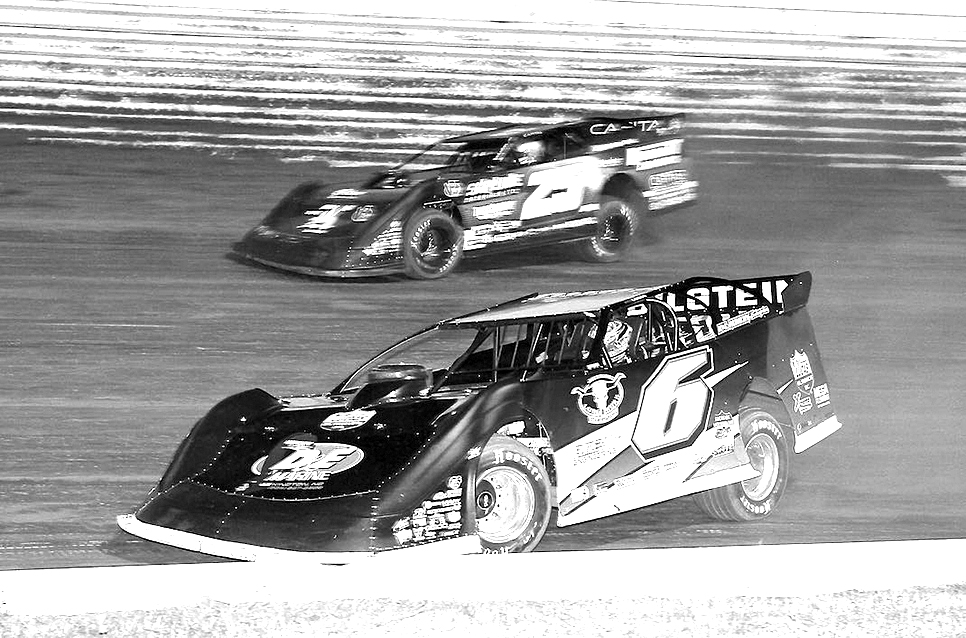 Kyle Larson in the #6 finished fifth in his first race then the next night came out with the win in Late Models at Port Royal Speedway. Photo courtesy of  FloRacing.com

Daytona means pack racing and big crashes. It was at Daytona earlier this year when #6 Ryan Newman’s car was demolished and he barely walked away with his life.
Night races are so much more enjoyable as fans can see sparks showering the track as splitters and other parts hit surface. Usually most teams drive a special paint scheme for night races that shine and reflect in the track lighting.
The race Saturday night was high energy right from the start as drivers tried to position themselves in a line for the draft. One small mistake of getting out of line could send a driver from first to twentieth in seconds. Daytona is a track where the best car may not always win, but the smartest driver always has a shot.
The #22 of Joey Logano was the most dominant car of the night taking both Stage 1 and Stage 2. Logano would play a pivotal role in the completion of the race, one I’m sure he wishes he could change.
Stage three was an all out speedfest as cars climbed in speeds around 200 mph while driving inches from each other.
It looked as though #18 Kyle Busch had finally solved his problems as he moved to the front and led 31 laps. Then the first big one happened with eight laps to go. Ten cars, including Busch, found themselves involved after rookie #8 Tyler Reddick thought he had cleared Busch; but as he moved to cut him off carried too much speed and hit the wall which started a chain reaction among the top drivers leading to a 10 minute red flag situation. It was ironic that thr three drivers fighting for the last two playoff positions all made it through the mess to be placed in a row on the upcoming restart.
The second big accident came as the cars lined up and restarted with five laps to go. This one caught up 11 cars with two big consequences. #43 Bubba Wallace was fighting for the lead when #11 Denny Hamlin running the bottom moved high hitting Logano who then moved high and took out Wallace. The wreck also took out the #48 of retiring champion Jimmie Johnson ending his chances of making the playoff in his final season.
The #24 of William Byron although clipped somehow wiggled his way through the mess Hamlin, Logano, and Wallace created to find himself in first place. Crew chief Chad Knaus was then put in the situation to pit due to the contact or stay out and risk their chances.
Byron stayed out and ended up winning his first Cup race and moving on to the playoffs. In the history of the #24 car only two drivers have ever taken it into victory lane... Jeff Gordon, and now William Byron.
Although it was a good race it was a sad way to see seven time champion Johnson knocked out of the playoffs, but look for him next year to be driving in the InyCar series.
Xfinity series raced on Friday night in a race that saw the Kaulig race team work together to put all three of their cars in the lead. Then disaster struck at the end as #10  of Ross Chastain tried to move from second around his teammate #16 A. J. Allmendinger, causing a wreck and taking them both out, but teammate #11 of Justin Haley went from third to first for his first win.
The Gander Trucks raced on Sunday and #2 Shannon Creed picked up his second win. This is Creed’s second win in three weeks and his second win in the Triple Truck Challenge pocketing him another $150,00.
The # 38 of  Todd Gilliland was the best truck on the track and had already won stages 1 and 2 and was his way to a sweep when Creed hit him and forced Gilliland to pit. Creed did apologize as soon as he stepped out of the truck saying the contact was his fault and purely accidental.
#99 of Ben Rhodes finished finished 11th.
ARCA at Gateway saw #18 of Ty Gibbs, grandson of legendary football coach and NASCAR team owner Joe Gibbs,  get another victory. He led most of the night and was pulling away when the checkers flew.
All the drivers say that Dover is a rough track, and I guess they are right. It seems the track rattled the lug nuts loose as six teams were fined by NASCAR.
I saw on the internet that a story was circulating that Denny Hamlin, Bubba Wallace, and Michael Jordan were going to buy out RPM and drive Toyota cars. I’m a little skeptical to the validity of this story and probably nothing more than click bait. Jordan has denied the story, but Hamlin has not been so quick to disregard it.

Bubba Wallace was awarded the Pocono Spirit Award by the National Motorsports Press Association for his advocacy in making NASCAR more diverse and inclusive.
Kyle Larson keeps winning as an Outlaw and you have to wonder just when and who will give him a chance to get back into NASCAR. Larson himself has mentioned he may be interested in coming back and industry heavyweight Tony Stewart said he should be allowed back in a recent interview. One wonders if Stewart would add him to his team which is at full capacity right now, but both Clint Bowyer and Aric Almirola have contracts that expire soon.
Natalie Decker, the driver for the #44 truck for Niece Motorsports, has announced she will be picking up four more races on the schedule starting with the Gateway race.
Larson also drove a late model for the first time in his career at Port Royal Speedway going in to the last lap he was in third, but finished in fifth. Then on his second attempt won the main at Port Royal beating all of the big name drivers on the dirt circuit.
Darrell Lanigan is sitting in fourth place in the WOOLMS. Recently at Williams Grove Speedway Lanigan finished seventh.
IndyCar disappointed fans with the finish  to the Indy 500 and turned around and repeated the yellow flag finish Sunday in the second race at Gatweway. Josef Newgarden driving the #1 Hitachi Penske Chevrolet  held off   the #5 of Pato O’Ward for his second win this season. As the two were racing side by side and a car behind them wrecked with around five laps to go, Indy counted the caution laps instead of waving a red flag. Newgarden, who was scored in the lead at the time, just followed the pace car right to victory lane.
Indy needs to quit allowing races to finish this way because this is not a good product for spectators.