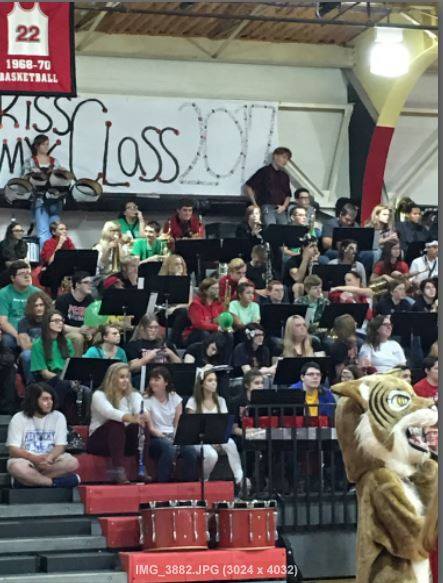 Decade after decade, the Pendleton County High School band has been one of the most successful programs in the school and in the area. They have captured countless awards, sent unknown number of students to college to study music and watched alum succeed in various ways in the music industry.
The year of 2020 presents a much different challenge to Music Teacher and Band Director Jacob Ritter.
“We are in uncharted waters,” he said about the challenge of teaching band in a virtual setting that prevents the entire band to come together.
With 32 students in concert band and another 34 students in wind ensemble, Ritter will be working one-on-one with students.
After getting the students used to the platform during the first week, Ritter indicated that he will take the opportunity to teach music theory and having them respond to performances while studying the elements of music.
As far as instruments, it is usually a one day process where a representative of the instrument company meets and sets students up with a school instrument.
That process will now be a three-day process for Ritter as he will be making appointments individually with students.
Once students have their instruments, Ritter indicated that he will have them creating and recording musical melodies through projects.
After receiving the music from Ritter, the students will practice and then record themselves on their phone or laptop and send it to Ritter. In turn, he will set individual meetings with students to aid them in developing their skills.
“Our teachers are doing a great job. They are amazing how quickly they have restructured their own lives to create a new educational structure,” said Principal Tony Dietrich.
Ritter said, “The hardest thing was getting that initial direction and how I was going to go.”
At first, he said, “I could not wrap my mind around it. Once I could think about it, I could start putting things together,” but he pointed out that he was “still figuring things out.”
“Practicing on-line by section is not feasible,” said Ritter who has looked into locations to practice when the band is allowed to get together.
While the KHSAA Board of Control, governor’s office and Kentucky Board of Education was arguing over the direction of athletics as they brought students together to practice, the question was raised about why band could not be brought together, too.
“There is not final guidance from Kentucky Music Educators Association on how to do that. There is guidance but no final guidelines,” said Dietrich.
Colorado State University, in conjunction with National Federation of High Schools that oversees both band and athletics, have been working on a study of musical playing in a Covid-19 world.
They began testing at least 100 participants, including wind players and vocalists that tests wind playing, speech and singing. While the CDC recommends six feet for social distancing, one study indicates that the transmission may be as much as 13 feet for display forced-air breathing as done in singing and playing.
On July 2, KMEA released a best practices for the music classroom.
It says that studies from other countries indicate “an increased risk of viral spread via indoor singing activities.”
In addition, it recommends that students wear masks when entering, leaving and moving within the music room and should remain in place for the duration of the class except for playing; social distancing of six feet should be maintained and music folders should not be stored in a common storage area; students should face the same direction and be six feet apart when playing a woodwind or brass instrument.
Ritter added that there is thought that cloth bell coverings for all instruments may become required to lessen the expulsion of droplets into the air that may increase the chances of transmission of the virus.
Dietrich said that all clubs would have to follow the “Healthy at Schools” guidelines.
As far as pep band playing at the first home football game, KHSAA approved of pep band at games but indicated they should be separate from the teams and fans and will count against attendance requirements for the contest.
About pep band playing at the September 11 football game versus Dayton, Dietrich said, “We’re still reading and working through all the document requirements at this point.”
Similarly, the All State Band through KMEA is up in the air.
“There is no hard deadline to register and get All State music to begin practicing,” said Ritter.
Now that he has his mind wrapped around charting Pendleton County High School Band through the “uncharted waters,” Ritter sees positives in his plan.
“It will definitely be good with the opportunity for students to learn  how recording can be a teaching tool.”
He will meet with students 15 minutes each day, focusing on their individual muscianship, responding to standards and will be evaluating them on notes and rhythm while acknowledging that tone will be tough as the microphones on phones and computers are not professional quality.
When the chance for him to get his band back together, he is already looking at opportunities.
“I have looked at the audtiorium for choir but not sure it is right for band. We are still researching what we can do with it,” he said.